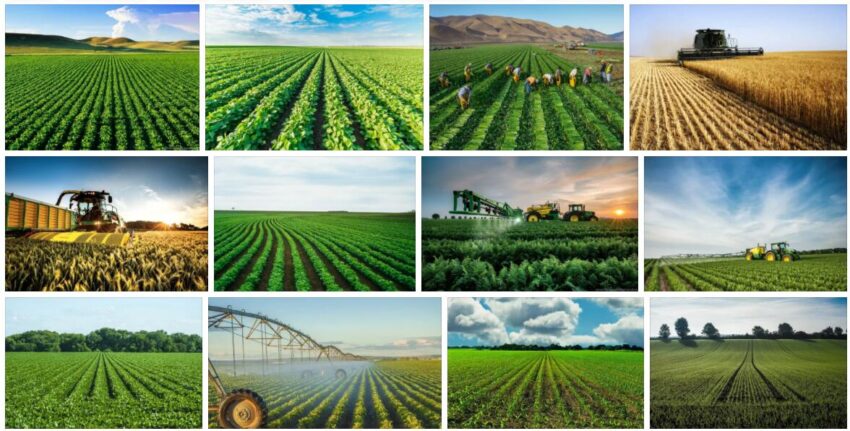 Agriculture is dedicated to cultivating the land to obtain products for human use and animal feed.

Almost a third of the earth’s surface is dedicated to primary activities, such as agriculture, livestock and forestry. The types of agriculture are very diverse, but it is possible to classify them into two categories: traditional or modern.

Agricultural activities began more than 10,000 years ago, during the Neolithic period. Since that time, human beings have built villages close to the fields and become sedentary. The first cultivated species were cereals : wheat in the Middle East and Europe, rice in Asia and corn in America.

The instruments for agricultural work were rudimentary. To plow the land, a piece of wood was used first. Then, the hoe was made. To cut the plantation and harvest, at first the hands and, later, sheep’s jaw bones were used; later, cattle teeth were placed on wooden supports and the scythes appeared. To grind the grains, hand mills were used. Later, the plow was invented.

From Antiquity to the Modern Age, about 90% of the population lived in the countryside, in small villages. In Europe and Asia, part of the camps was divided into small areas, in which the peasants worked for their own livelihood. However, most of the land was in the hands of a minority, who used slaves or serfs for agricultural work. The cultivation systems were rudimentary. Rotation was used, that is, it was not sown all over the land, leaving each year a part of the unproductive land to rest.

Until the 18th century, agriculture remained traditional and not very productive. Agriculture depended on nature’s cycles and was very vulnerable to catastrophes and climate change.

At the end of the 18th century, a true agricultural revolution in techniques and production began. The change began in the United Kingdom and, little by little, spread to the rest of Western Europe and other countries, such as the United States. Most of Asia, Africa and Latin America were left out of the process.

Agricultural productivity has increased markedly thanks to improved farming techniques and changes in agrarian structures.

The traditional agriculture is characterized by a certain delay technology, which is more dependent on physical factors. It uses traditional techniques and tools, such as the hoe, sickle and plow. It coexists with livestock, which provides fertilizer for the land. The effort that the farmer has to make is great, and the yield of the land is quite low. It is usually a subsistence activity.

The modern agriculture is characterized by the use of technology, which reduces reliance on physical factors. Chemical fertilizers increase soil fertility and make coexistence between crops and livestock unnecessary. The use of machinery requires less labor and facilitates the work of farmers, who obtain high productivity. Agricultural production, in this case, is normally intended for trade.

In addition to conventional agricultural systems , there is yet another way to analyze production systems in the field, which is when we take their labor relations into account. In this sense, we can distinguish two distinct forms: family and employer farming .

In this production system, all management is done by a family group, whether or not they are the landowners, with or without contracted labor.

We can recognize several types of family farming, such as subsistence , gardening (common in South and Southeast Asia), green belts (around urban centers) and itinerant (common in very poor regions of the planet).

Depending on the agricultural policy adopted by the State, family farming has a prominent role in the production of food for domestic supply and even in the generation of exportable surpluses, through the cooperative system, which reduces costs and increases productive capacity.

The system of agricultural cooperatives allows the grouping of several small rural producers and everything they buy or sell is done together. If, for example, they need to buy seeds for planting, the purchase is made together, which reduces the costs for each cooperative farmer. This is the case at all stages of production.

It is also called business. In this agricultural system, salaried, wheeled or permanent labor predominates and the worker is not the owner of the land.

It has advanced production resources, forming, in developed countries, large complexes or agro-industrial productive systems that are highly capitalized and have excellent transport, storage and production infrastructure.

Techniques such as the use of special seeds – including transgenic ones -, intensive use of manure and fertilizers and a high degree of mechanization are common in these properties. In addition, it also uses qualified professionals, such as agronomists, zootechnicians and engineers.

As for the size of the properties, they are medium and large and have a high degree of specialization in production. Because they are quite developed, they are fully integrated into the industrial and service sectors, creating a production chain called by many agribusiness or agribusiness specialists .

In family farming, small property predominates, unpaid labor and production geared to supplying the domestic and foreign markets. In the employer’s agriculture, the properties are larger, the labor is salaried and the production of large surpluses is for export, supplying the industrial sector and / or the domestic market.